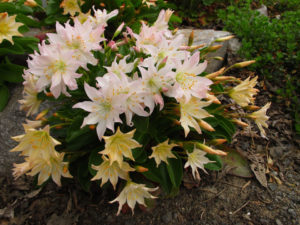 Tweedy’s lewisia (Lewisiopsis tweedyi) will make its stunning appearance before long In fact, the nursery season for Derby Canyon Natives is well underway!  With the lack of snow at our elevation and fairly mild temperatures we began nursery operations earlier then ever in late February. Much of the next three+ months will be taken […]